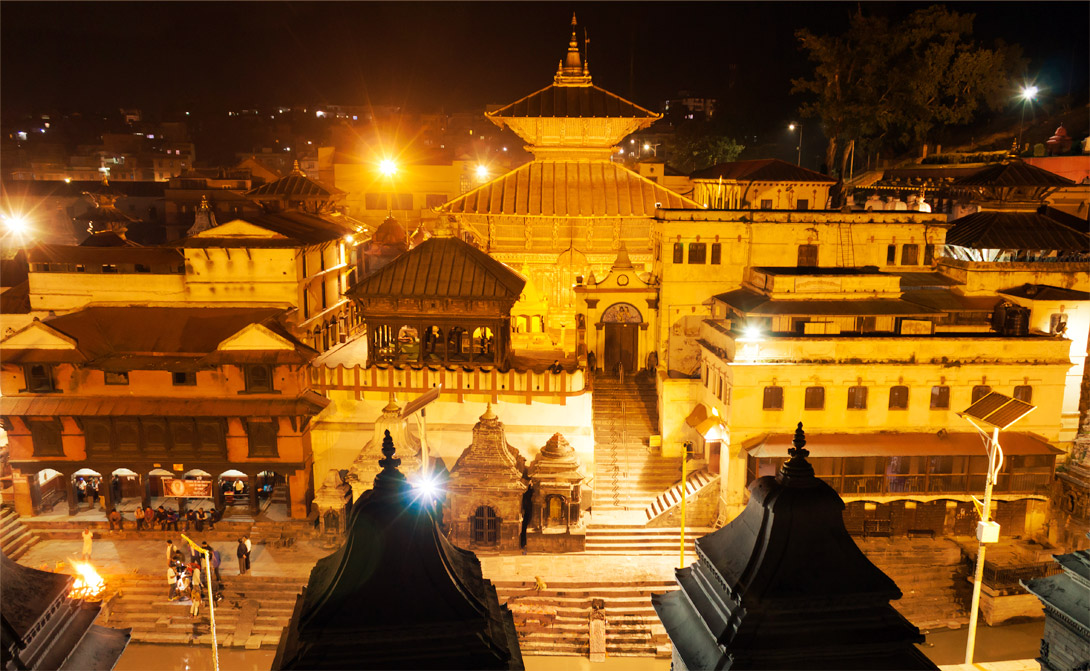 Pashupati Nath Temple, situated 5 km east of Kathmandu, the temple of Lord Shiva is considered one of the most sacred Hindu shrines in the world. Also it is one of the Biggest and famous Hindu  Lord Shiva's Temple in the  world. so every year thousands of Hindu pilgrimage & Tourist visit in the Temple .  The two-tiered pagoda with golden roofs and 4 silver doors houses the sacred  linga, or phallic symbol, of Lord Shiva. Chronicles indicate the temple existed before 400 A.D. It is listed under  the  UNESCO World Heritage Sites.

Guheswari or Guhyeshwari  Temple गुह्येश्वरी मन्दिर
It also spelled Guheswari or Guhjeshwari, is one of the revered holy temples in Kathmandu, Nepal. This temple is dedicated to Adi Shakti. The temple is a Shakti Peetham near the Pashupatinath Temple on the banks of the Bagmati River ,where, according to mythology, a portion of Sati Devi, Lord Shiva’s consort, fell when a grief-stricken Shiva wandered aimlessly across the earth carrying her dead body on his shoulders following her self-immolation.

Budhanilkantha( Jal Narayan ) बुढानिलकन्ठ
The largest of Vishnu’s stone statues, (Budhanilkantha)Jal Narayan lies at the foothills of the Shivapuri hills, 8 km north of the Kathmandu city center. The large granite figure of Lord Vishnu, reclining on a bed of serpents known as ‘Nagas’, seems to float in a pond. This shrine dates back to the 5th century. 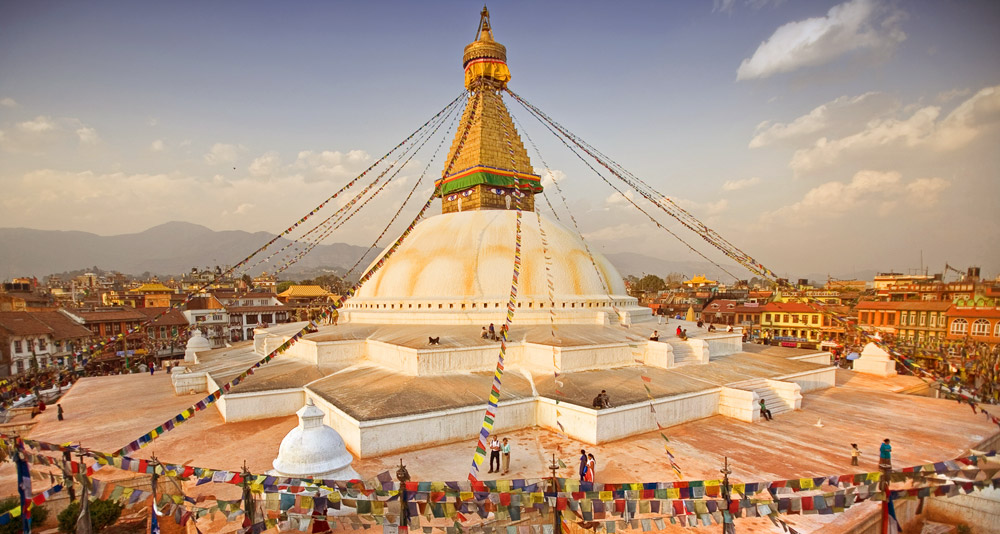 Bouddhanath Stupa is one of the most imposing landmarks and the biggest stupa  in Nepal, lies about 7 km east of the capital. The Bouddhanath stupa, also called by many as Khasti Chitya, is one of the oldest stupas in the country. The stupa, a well-known Buddhist pilgrimage site, is included in World Heritage Cultural site list by UNESCO. In Bouddhanath stupa, there are many monasteries or Gompa attractions. They are all impressively adorned and colorfully painted .Nepalese chronicles date it to the reign of King Mānadeva (464-505 CE).

Swyambhunath Stupa (UNESCO World Heritage Site) श्वयम्भुनाथ
The Buddhist temple of Swyambhunath, situated on the top of a hillock ,3 km west of Kathmandu. It is the most ancient and enigmatic of all the holy shrines in Kathmandu valley .
A collection of legends about the site, the 15th century Swyambhu Purana, tells of a miraculous lotus, planted by a past Buddha, which blossomed from the lake that once covered Kathmandu valley. The lotus mysteriously radiated a brilliant light, and the name of the place came to be Swyambhu, meaning 'Self-Created or Self-Existent'. Saints, sages and divinities traveled to the lake to venerate this miraculous light for its power in granting enlightenment. Atop Swyambunath hill is another fascinating temple called Shantipur, popularly known as the 'Palace of Peace'.We can see the panoramic view of Kathmandu over here. 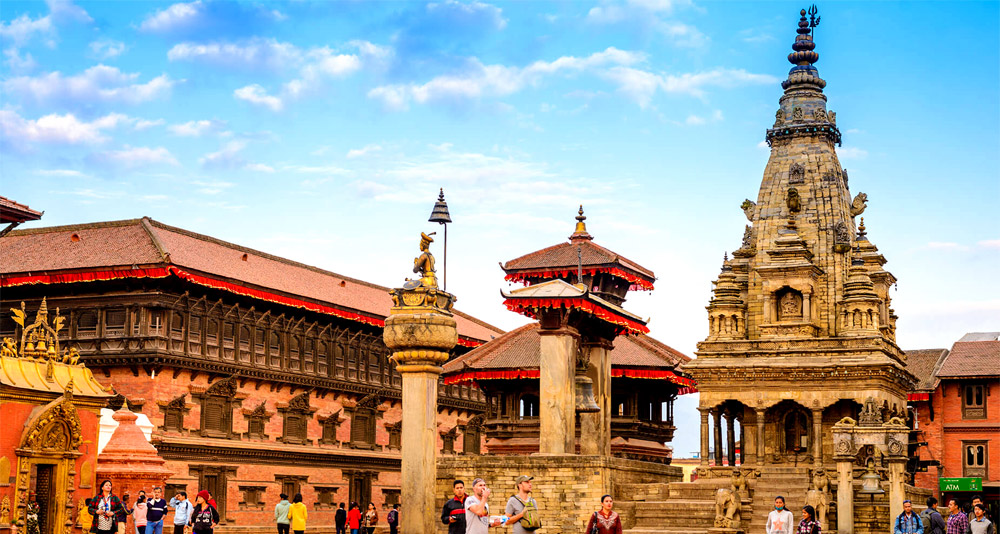 Kathmandu Durbar Square is the plaza in front of the old royal palace of the then Kathmandu Kingdom. It is listed under  the  UNESCO World Heritage Sites. The preference for the construction of royal palaces at this site dates back to as early as the Licchavi period in the third century. It holds the palaces of the Malla and Shah kings who ruled over the city..  Along with these palaces, the square surrounds quadrangles revealing courtyards and temples. It is known as Hanuman Dhoka Durbar Square, a name derived from a statue of Hanuman, the monkey devotee of Lord Ram, at the entrance of the palace. Major attractions of Kathmandu Durbar Square are  Living Goddess, Kumari, Kasthamandap,  Ashok Binayak, Kaal Bhairav,  Jagannath temple, Kotilingeswara Mahadev, Mahendreswara, and   three-roofed Taleju Temple.

Patan Durbar Square  पाटन (UNESCO World Heritage Site)
The Patan Durbar Square is situated at the heart of the Lalitpur city, it constitutes the focus of visitors' attraction. It is listed under the UNESCO World Heritage Sites .The Square is full of ancient palaces, temples and shrines, noted for their exquisite carvings & marvel of Newa (a kind of ethnic communities) architecture. The Krishna temple was built in 1637 by King Siddhinarasimh Malla  which   is the most important temple in Patan Durbar Square of  Shikhara style.
There are 21 golden pinnacles in the Krishna temple. Below the pinnacles there are 3 stories. The first floor holds the main shrine of Lord Krishna with shrines of Radha and Rukamini at each side. The second floor is dedicated to Lord Shiva and the third to Lokeshwor(Lord Buddha)
Major attractions are Krishna Temple, Vishwanath Temple, Taleju Bhawani Temple, Patan museum,Golden Temple , Kumbheshwor Mahadev, Bangalamukhi temple and  Chowk & court- yards are Central Mul Chowk, Sundari Chowk and Keshav Narayan Chowk.

Manakamana Temple मनकामना
Manakamana Temple (15 Minute by cable car- ropeway ride up to Hill).
The Manakamana Temple situated in the Gorkha district of Nepal is the sacred place of the Hindu Goddess Bhagwati, an incarnation of Parvati. The name Manakamana originates from two words, “mana” meaning heart and “kamana” meaning wish. Venerated since the 17th century, it is believed that Goddess Manakamana grants the wishes of all those who make the  make the pilgrimage to her shrine to worship her. The Manakamana temple lies 12 km south of the town Gorkha. The temple is located on a distinguished ridge 4,272 ft above sea level.

The Chitwan National Park is Asia’s best preserved conservation area, where wildlife thrives and their habitats remain intact. It is listed under World Heritage site since 1984.It is home for some endangered species such as The Royal Bengal Tiger, One horned Rhinoceros, and Leopard, Gaurs as well as Sloth Bear, Monkeys and varieties of Deer etc. It is a truly wildlife adventure of a different kind such as Elephant Safari, visit elephant  breeding centre  Jungle walk& Boating ride on the Rapti River to observe crocodiles & Tharu cultural show, at Chitwan.

Wake up Early in the morning drive to Sarangkot for Sunrise view (optional). Return to Hotel for breakfast and start your halfday sightseeing of Pokhara such as Bindvabashini Temple which is famous for hindu pilgrimage, the Davi’s fall locally known as Patale Chhango ( hell’s fall ); is lovely waterfall lying about two km south west of Pokhara Airport on the Siddartha Highway and Gupteswar Cave is a sacred cave, situated opposite of Davi’s fall the cave is almost 3 kms long. and the picturesque Fewa, Begnas and Rupa lake enhanced its beauty. For the Mountain Lovers Pokhara offers the magnificient views of Mt Fish Tail locally name “ Machhapuchre “ 5 peaks of Mt Annapurna, Dhaulagiri, Himanchuli and other peaks. Pokhara Valley is such a place in the World to provide such a dramatic views in the subtropical setting and its colorful bazaars. Later visit & take the opportunity to shop for souvenirs.

Lumbini लुम्बिनी
Lumbini, the birthplace of Lord Buddha, in the Terai plains of Nepal is one of the greatest pilgrimage sites for Buddhists. More than 400,000 Buddhists and non Buddhists visit Lumbini every year. It is also a UNESCO World Heritage Site (Culture) and holds immense archeological and religious importance.Sacred Garden: It was here in the gardens of Lumbini that Prince Siddhartha Gautam, who later became the Buddha, was born in 623 BC. The nativity site is marked by a commemorative pillar erected by Mauryan Emperor Ashoka of India during his pilgrimage to the holy site in 249 BC. The inscription on the Ashoka Pillar indentifies the  Sacred Garden – spread over 9 sq. km – as the spot where the Enlightened One was born. A large number of Buddhist pilgrims from all over the world visit Lumbini to pray at the  Mayadevi Temple where excavations have revealed the “marker stone” showing the exact spot where Siddhartha Gautam Buddha was born. The sacred  Puskarni Pond where Queen Mayadevi had taken a bath before the birth of Buddha lies to the south of the pillar. It was also in this pond that the infant Buddha was given his first bath NTB.