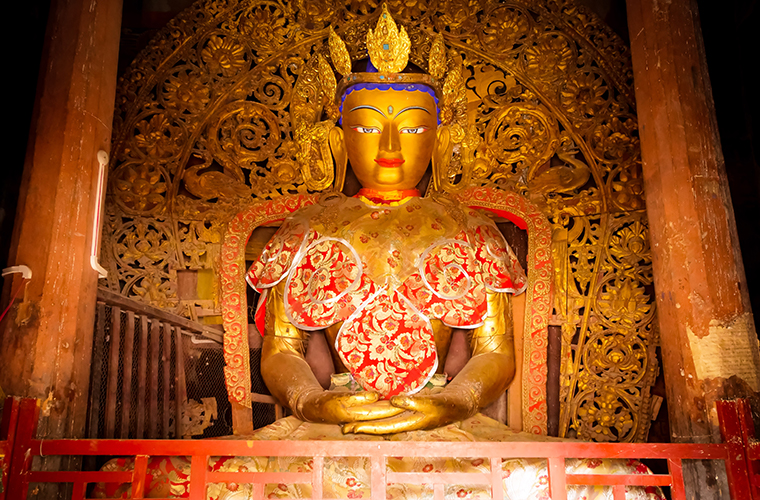 Buddhist Cultural Tour - 8 Days exposes you to a combination of natural and cultural sites, especially designed for those interested in the Buddhist monuments in the birthplace of Buddha.  Depending upon the time you can spend for your Nepal trip, you may also find it interesting to check out our other tour packages. Some of our  tour packages that cater to the specific needs of the travelers include  This circle tour provides great opportunity to visit all four sacred places of Buddhism. Lumbini (nepal) the birthplace of Buddha is the most majestic site to visit now with temples, monuments and archeological sites.  You will visit Kushinagar where Buddha got nirvana, Bodgaya where Buddha enlightened and Sarnath where he first preached to his disciples.

Major Attractions: You will visit the Mystic Kathmandu full of myth and temples. The Birthplace of Buddha, the place where he enlightened and preached and got nirvana are the prime attractions. The cross country experience from the Himalayan country to the Vast Indian territory is amazing

Day 02: Visit Boudhanath, Some Monasteries at Boudha & Kapan Monastery
Today we visit to Boudhanath Stupa, one of the largest stupas in the world and an important Buddhist pilgrimage..  The area of Boudhnath is also famous for over 50 Tibetan Gompas or monasteries, the also being known as the 'Little Tibet'.  The Kapan Monastery at Kapan Hill, a few kilometers higher north from Boudhanath is also known as Nepal Bouddhist Mahayan Centre.  Kapan Monastery follows Gelug tradition of Tibetan Mahayana Buddhism under the guidance of Lama Zopa Rinpoche. There is also a nunnery nearby the main monastery, known as the Khachoe Ghakyil Ling Nunnery, home to about 400 nuns. Overnight at Kathmandu.
Included meals:Breakfast

Day 03: Visit Swoyambhunath & Drive to Pokhara
We drive to Swoyambhu Stupa in the morning, which is one of the oldest Buddhist monuments in the world with more than 2000 years of history and also a major Buddhist pilgrimmage. According to legend, the civilization of Kathmandu Vallley itself begins with Swoyambhu, which literally means "the self-existent." It is said that Bodhisattva Manjusri came across a beautiful lake while traveling and saw a lotus, with thousand golden petals, diamonds pistils, ruby anthers, and lapis lazuli stalk. The legend also says that the lotus seed was planted on a full moon night by Bipaswi Buddha himself.  In the course of time, Santikarcarya, the king who turned into a Bhikchu or a monk, raised the first stupa on the holy site. After visiting Swayambhunath, we make a 6-hour drive to Pokhara in the afternoon to pay our visit to some Buddhist sites there. Overnight at Pokhara.
Included meals:Breakfast

Day 04: Pokhara: World Peace Pagoda, Malepatan Gumba, Hyangja Tibetan Refugee Camp
Today we visit some Buddhist landmarks in Pokhara and also enjoy the nature's majesty. The massive Buddhist stupa of World Peace Pagoda was constructed by Buddhist monks from the Japanese Nipponzan Myohji organisation on a narrow ridge high above Phewa Tal. Besides being a cultural monument, the site is also famous for the panoramic view it offers of the Pokhara Valley. We cross the Phewa Lake on a boat and then hike to the Stupa. Then we will visit the Malepatan Gomba or monastery at Malepatan. Then we make another hike to Hyangja, the site for Tibetan refugee camp who fled Tibet after the Cultural Revolution in China. You may try the Tibetan variety of foods, bargain for curios, and at the same time acquaint yourself with the Tibetan culture. There is the Tashi Palkhiel monastery in the tradition of Karma Kagyu tradition. Overnight at Pokhara.
Included meals:Breakfast

Day 05: Drive to Lumbini
We drive to Lumbini today - about 290 kilometers south-west from Pokhara which takes for about 6-7 hours. We bid goodbye to the Himalayas in Pokhara, and head toward a more flat lands of Nepal's Terai. Generally, the weather gets hot and humid in the plains except in the winter. Perhaps, Lumbini is the most important Buddhist pilgrimage site - the place where Buddha was born. In case we reach Lumbini around the sunset time, we can stroll in the local market to have a glimpse into the local lifestyle.  Overnight at Lumbini.
Included meals:Breakfast

Day 06: Full Day Explore Lumbini
Lumbini is one of world's major religious, architectural, and historical places. We devote today's time in visiting as many places and sites in Lumbini as possible. The place is really a big area with monuments, temples, and ancients sites making it a UNESCO World Heritage Site. First we visit the Mayadevi temple which is built on the exact place where Buddha was born. We spend some time wandering around the gardens. We also visit the museum and peace pagoda. Some of the important landmarks and monuments in Lumbini include: Ashoka's Pillar erected by Emperor Ashoka (249 BC) on the spot of Buddha's birth which also has the oldest inscription in Nepal. There are many Buddhist Temples founded by the devotees from different countries:  Tibetan, Chinese, Japanese and Burmese, Korean, etc. Overnight at Lumbini.
Included meals:Breakfast

Day 07: Fly back to Kathmandu
After breakfat at 8am fly to Kathmandu (1350m), transfer to Hotel ,rest of time free leasure evening fare well dinner